How shall I describe the month of November  without exagerating?As I was leaving my Berlin appartment, equipped with a rather heavy suitcase and a lot of good will a phone call came asking ‘ would you like to replace someone? There has been a cancellation for 2 performances of Tchaikovsky’s 1st Concerto in Regensburg in Germany. I said ‘ Sure’ , quickly stuffed the concerto score into my suitcase and flew to Madrid for a performance of Brahms 1 at the Auditorio Nacional ( a really beautiful hall!!!) .

A few days later , as I was already performing the closing concert of the Kasseler Musiktage in Germany (also performing Brahms this time with the Staatskapelle Weimar and Stefan Solyom) I realized that substituting in Regensburg would actually mean the following : I needed to first go to Boston and perform Brahms 1 for 3 times with the Boston Philharmonic; fly back to Europe the day following the performances and upon landing in Frankfurt go to Regensburg and rehearse Tchaikovsky that same evening.And that only to leave the next day to Granada in Spain ,rehearse ‘Nights in the Gardens of Spain’ with the orchestra there,perform it twice, and the morning after the last Granada performance get up at 5, go to the airport with the idea to arrive to Regensburg at 18.30 (after an insane taxi ride, 2 flights, one train and one more insane taxi ride) to perform Tchaikovsky 1 at 20.30 with a short ‘warm up rehearsal’( candidly called ‘Einspielprobe’ in German).
I couldn’t resist. So I did it.
Of course, I was tired after the performances . But, all the performances went well, the reviews were very good, the audience reactions as well – it was an adventure and I would have been so sorry to miss it !!! 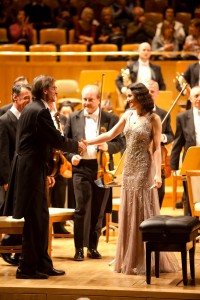